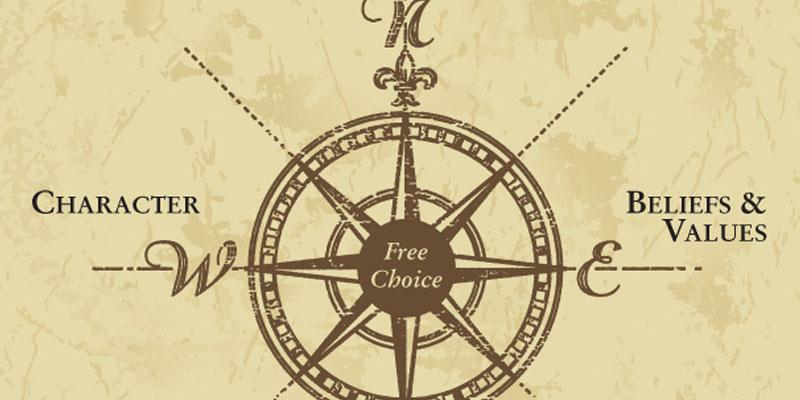 Some folks have a split personality . . . on the one hand, they believe that being unscrupulous leads to success, but on the other hand, they also recognize that a solid reputation provides ancillary benefits. So they’re ruthless most of the time and rely on a few PR maneuvers to promote their decency. In their eyes, moral character doesn’t contribute directly to success –– for them, strong moral character is a sideshow, not part of the main act.

The fact is, there’s a direct correlation between moral character and success. We lose something very important when character is treated as an afterthought.

The Case for Strong Moral Character

Strengthen trust. People with character enjoy meaningful relationships based on openness, honesty, and mutual respect. When you have good moral character, people know that your behavior is reliable, your heart is in the right place, and your word is good as gold.

Reduce anxiety. People with character carry less baggage. They’re comfortable within their own skin, and they accept responsibility for their actions. They never have to play games, waste precious time keeping their stories straight, or invent excuses to cover their behind.

Increase leadership effectiveness. Leaders with character are highly effective. They have no need to pull rank or resort to command and control to get results. Instead, they’re effective because they’re knowledgeable, admired, trusted, and respected. This helps them secure buy-in automatically, without requiring egregious rules or strong oversight designed to force compliance.

Build confidence. People with character don’t worry about embarrassment if their actions are publicly disclosed. This alleviates the need for damage control or the fear of potential disgrace as a result of indiscretions.

Become a positive role model. People with character set the standard for excellence. They live their life as an open book, teaching others important life lessons through their words and their deeds.

Live a purpose-driven life. People with character live a life they can be proud of. They’re driven to make a difference and to do right by others rather than trying to impress others with extravagance. (Sounds like a wonderful legacy to me.)

Build a strong business. Doing the right thing is good business. Everything else being equal, talented people would rather work for –– and customers would rather buy from –– companies that do right by their people, customers, and communities. While unprincipled business tactics may provide short-term results, it’s NOT a long-term strategy.

Some people may say, “This stuff is naïve and wishful thinking . . . the reality is that business is ruthless and most people only care about themselves.” These folks feel the only way to get employees to “do the right thing” is to coerce them.

I believe that’s hogwash. When people are forced to “do the right thing,” they’ll try hard to fight and resist the effort. A better strategy is to prove that a strong character is in everyone’s best interest –– and it is.

Immoral behavior is not the easy road to success. In fact:

Most importantly, every day that you display weak character, you’re letting yourself down. You must answer to your conscience every minute of every day. As Theodore Roosevelt said, “I care not what others think of what I do, but I care very much about what I think of what I do! That is character!”

If most people know the difference between right and wrong, why do some shortchange themselves by selling their soul?

They must think, “I’m under pressure to perform,” “I don’t want to lose face,” and “I have an image to maintain.” They reason, “The rewards are worth it,” “It’ll only be this time,” and “No one will ever find out.” Sadly, . . . they probably say, “Everybody does it” or “I’ve gotten away with it before. And, I bet I can again.” But, before you know it, this behavior becomes habit.

Well, if you look in the mirror and don’t like what you see, don’t blame the mirror. It’s never too late to change.

It’s not always easy to admit a mistake, persevere during tough times, or follow through on every promise made. It’s not always comfortable to convey the hard truth or stand up for your beliefs. In the short term, it may not be beneficial to do right by your customers, to put people before profits, or to distance yourself from a questionable relationship. BUT, in the long run, doing the right thing is the clear path to both success and happiness.

When you have strong moral character, you’ll be judged by who you are rather than who you pretend to be; you’ll be a trusted friend rather than suspected as a foe; you’ll learn from your mistakes rather than hiding them in fear; you’ll serve as an outstanding role model for your admirers rather than leading them down a dead-end path; you’ll look forward to the future rather than defending your past; and your reputation will do you proud rather than reveal your flaws.

Although you may not be able to quantify the benefits of being a good person, there’s great truth in the saying, “good people finish first.” Strong moral character is like a boomerang that causes good things to find their way back to you –– but it takes effort. Jim Rohn, the business philosopher, said, “Character isn’t something you were born with and can’t change, like your fingerprints. It’s something you weren’t born with and must take responsibility for forming.” So promise yourself to be true to yourself and do what’s right, even when nobody is looking –– Character matters.

How Do You Feel About Character?

Additional Reading:
Reputation: You Can’t Run from Your Shadow
Trust Me … Trust Me Not
Leadership Scorecard
Ethics as Usual
Managing with a Conscience