Home » Blog » Are You Blurring the Line Between Right and Wrong? 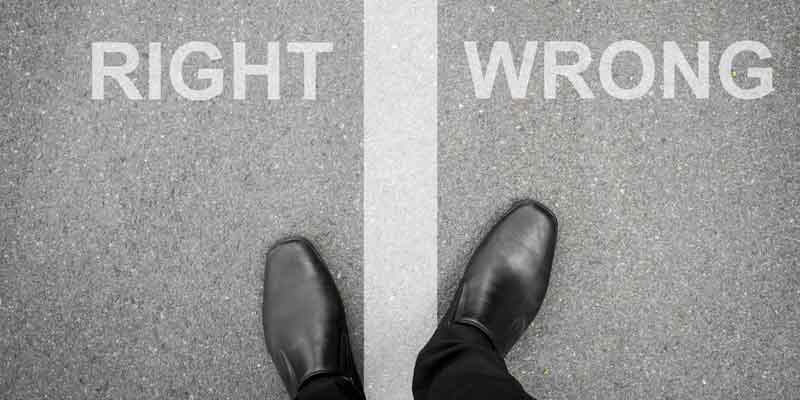 Can you imagine the stress and anxiety that would result if “every man for himself” became standard behavior? How about if people felt emboldened to speak their mind regardless of whether they offended others by being rude, disrespectful, or hurtful? That would change the way that you viewed relationships, treated business associates, and raised your children. Pretty ugly, right?

You may be thinking that this “Wild Wild West” scenario could never happen. Maybe so. But what would happen if the clear distinction between right and wrong became blurred? The result? Immoral behavior would become so prevalent it would alter our social fabric.

This could actually occur if people lowered their standards and closed their eyes to immorality and if there were no consequences for bad behavior. In that scenario, people could justify their actions by claiming that the end justifies the means and declaring that if “everybody does it,” it must be acceptable. Right? Unfortunately, this mindset would send a strong signal that unacceptable conduct is now considered normal.

Do You Know Right from Wrong?

If this scenario scares you, it should. If this nightmare ever came to pass, it wouldn’t occur overnight. It would be the result of small acts flying under the radar — over a period of time.

When people say mean-spirited things in a joking manner, make personal attacks in a heated debate, and when mobs force their personal beliefs on others, the result is the same. We are blurring the distinction between right and wrong. The fact is, actions have consequences; words do, too. When bad behavior isn’t challenged, it becomes acceptable to act in an unacceptable way.

Every time you excuse dishonesty, cover for misconduct, or fail to hold people accountable for their actions, you’re complicit in dragging us down. Every time you’re too uncomfortable to speak up or too busy to get involved, or you give someone a pass — because you benefit — you’re bringing us one step closer to this nightmare scenario. Over time, norms collapse, traditions break down, and people become desensitized to immorality. Bad behavior becomes the new normal. If that occurs, it will be nearly impossible to raise good kids because they’ll be surrounded by toxic people, bombarded by rotten entertainment, and besieged by negative role models. Is that what you want? You have the power to make a difference — if you try.

Listen to your conscience, be an exemplary role model, lead by example, and hold people accountable for their actions — even if it’s uncomfortable to do so. While it’s tough to change the world, you can change the world around you. There’s a huge difference between right and wrong. It’s our job to point out that reality to those who have forgotten.

Are You Blurring the Line Between Right and Wrong?

Additional Reading:
What Does Your Name Say About You?
Would You Do Something Unethical If You Could Get Away with It?
Moral Character Matters
7 Reasons Why Traditions Are So Important
Reputation: You Can’t Run from Your Shadow