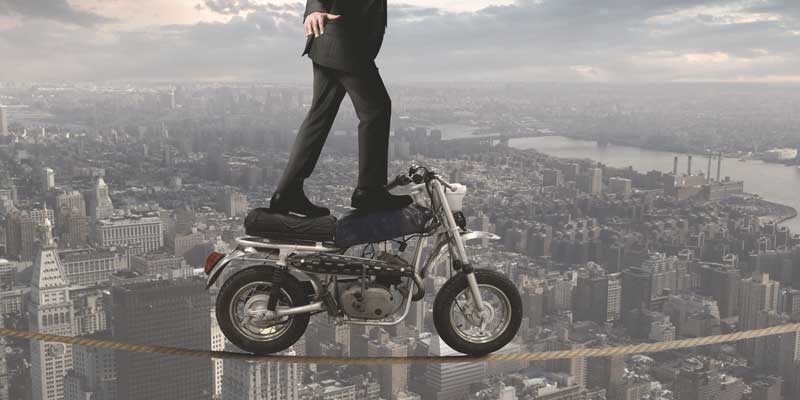 You’re going to take the world by storm. You’re talented and trustworthy, and you have a work ethic that’s second to none. These words probably aren’t coming as a surprise. You’ve already achieved a successful track record and have earned the trust and respect of your peers. Sure, you’ll be faced with obstacles, slammed by adversity, and may even doubt yourself along the way. But I’m confident that you have what it takes to be a success. You’re going to be a star. There’s just one thing I’d like you to keep top of mind: Courage.

It’s important for you to believe in yourself, stand up for the principles that you hold dear, and see the world for what it really is, not what you want it to be. Don’t be afraid to embrace change, confront uncertainty, and face the unknown. For these things are ways of life. Make sure to be bold, follow your heart, and dream BIG. As Walt Disney once said, “All our dreams can come true if we have the courage to pursue them.”

People with courage possess ten shared characteristics. They should remain as guideposts in your journey through life:

Self-confidence. Courageous people believe in themselves. They know who they are and what they stand for. They have strong values, recognize their personal capabilities, and are confident in meeting the challenges that lie before them. Courageous people are passionate and purposeful. You can sense courageous people when they walk into a room –– they have a bounce in their step, maintain a positive outlook, and are comfortable in their own skin.

Conviction. You always know where courageous people stand. They’re passionate about their beliefs and values and have consistent and predictable behavior. They don’t blindly follow the crowd, waffle in the face of adversity, or change their opinion unless the change is supported by a strong, factual case.

Integrity. Courageous people know the difference between right and wrong. They don’t just talk about honor; they live it every day by following the letter, as well as the spirit, of the law. They are trustworthy, objective, fair, and tolerant, and they stand up against injustice –– backing their words with action.

Leadership. Courageous people aren’t deterred by adversity or afraid of what people may think of them. Courageous leaders motivate people with personal charisma, expertise, integrity, and respect rather than by using their position or authority as a crutch. Courageous people are tough, but fair. While they may ask others to achieve the “impossible,” they ask of others only what they’re willing to do themselves.

Compassion. Courageous people put other people’s needs ahead of their own. They know that the Captain must go down with the ship and that being selfless helps to gain the respect of friends and colleagues.

Objectivity. Courageous people understand the importance of trust, honesty, and full disclosure while confronting people who hide behind untruths. They believe that people are willing to make tough decisions if the options are presented to them in an open, honest, and objective manner. They also believe that people should admit their mistakes, learn from them, and move on rather than waste precious time playing politics.

Adversity. Courageous people aren’t afraid of swimming against the tide or challenging the status quo. They stare adversity in the eye — running toward the problem rather than away from it. They know that saying “no” to one idea may enable them to say “yes” to another, and that old ways of doing things shouldn’t stand in the way of a better solution.

Change Masters. Courageous people step outside their comfort zone to meet the challenges that lie ahead. They know that change is part of life and that some of the greatest advances have been realized by embracing change.

Embrace the Unknown. Courageous people follow their intuition. If information required to make a good decision isn’t available, they follow their instincts.

Action. Courageous people put their money where their mouth is. They know that it’s not enough to talk about doing something –– instead, they act.

The Badge of Courage

Some folks are afraid to take the risk of sharing their opinions or sticking out their neck for fear of getting it “chopped off.” They think: “What if I’m wrong?” “What if it fails?” “What will others think of me?” So they spend their life playing it safe and trying to make themselves invisible.

These same folks are silent even though they have the best answer; they let opportunities slip through their fingertips even when they look promising; they see other people pass them by in the fast lane of life even though those people are less deserving. The truth is, they’re so afraid of failing that they don’t try at all — and consequently, they fail.

You have what it takes to be successful. So believe in yourself and your abilities or you’ll never know what you’re really capable of achieving. As Aristotle said, “You will never do anything in this world without courage. It is the greatest quality of the mind next to honor.”

Don’t be afraid to put yourself on the line if you want the rewards that life has to offer. That means, like in baseball, it’s better to go down swinging than to be called out on strikes. Steve Jobs once said, “Your time is limited, so don’t waste it living someone else’s life. Don’t be trapped by dogma — which is living with the results of other people’s thinking. Don’t let the noise of others’ opinions drown out your own inner voice. And most important, have the courage to follow your heart and intuition.”

Now you have everything it takes to be a winner. So go for it! Remember — Courage: no guts, no glory.

What Are Your Thoughts About Courage?