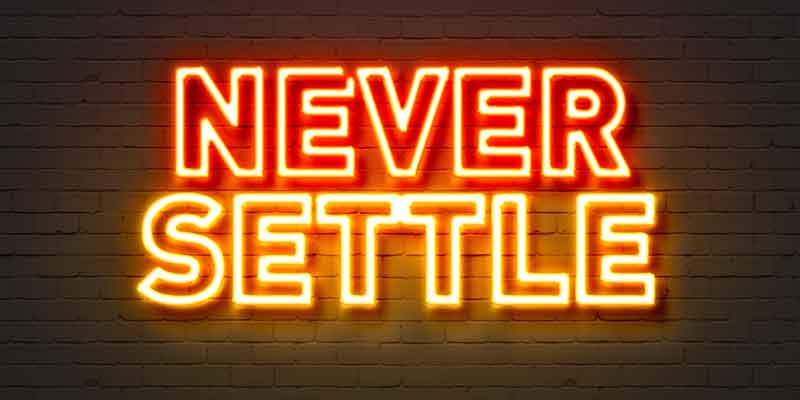 When you go into a room, your body adapts to the temperature. The same holds true for your mindset. How much are you influenced by the people you spend time with? Do they bring out the best in you? Or do you find yourself compromising your values, mimicking improper behavior, or lowering your personal standards?

While it may be tempting to take the easy route, to follow the crowd, or to be seduced by riches, you are responsible for your conduct — and the consequences of your actions — regardless of how others behave.

People can’t make you do things without your permission.

Your Personal Standards Define You

Never lower your standards, compromise your integrity, or dishonor your name. Here are 10 ways people degrade themselves.

Give in to temptation. Some folks stretch the truth, let their eyes wander, or get seduced by money. I hope you have the willpower and self-respect to say no.

Relax your standards. Some people are tempted to lower their standards because others are slacking off. While it may be appealing to take a breather, bad habits are hard to break.

Follow the crowd. Some folks follow the pack because they assume others know better. Even though a group may provide comfort and security, it doesn’t guarantee that their motives are pure or that they’re thinking rationally or ethically.

Mimic inappropriate behavior. Some people fall into a bad crowd and imitate their behavior. The truth is, “Everybody does it” doesn’t mean you have to do it.

Look the other way. Some folks turn their backs, fail to speak out, or cover up for unethical behavior because it’s convenient. Every time you close your eyes to immorality or injustice, you’re condoning it.

Crave acceptance. Some people will do anything to win acceptance from the in-crowd. Think long and hard before you pay the price of admission.

Get dragged into a tussle. Some people always seem to be looking for a fight. While you may be provoked to jump in, think twice before you take the plunge. As a famous saying goes, “Never wrestle with pigs. You both get dirty and the pig likes it.”

Lose control of your temper. Never respond emotionally. If you’re angry or upset, count to 10 before communicating your feelings. If that doesn’t work, try 20.

Compromise your values. Some folks impose their way of thinking on others. You win a debate with a better argument, not by force.

Take shortcuts. Some folks act unethically to look good, cover their behind, or get what they want. The prize for living with honor and integrity is that, even though you won’t win all the time, you’ll be true to yourself and your values.

Jim Rohn, author and entrepreneur, famously said, “You’re the average of the five people you spend the most time with.” What he’s saying is that people will influence you. It’s only natural. That being said, I hope you spend time with folks who are smart, kind, and honorable — but what if they’re not?

Be aware of the impact that others have on your behavior. Don’t let bad habits, weak character, low standards, or immoral behavior rub off on you. If anything, be a positive influence on others and an inspiration to them.

Keeping bad company is like being in a germ-infested area.
You never know what you’ll catch.

Be your own person. Set your bar high and don’t lower your standards for anyone. You’re better than that. Some of the most precious things you possess are your honor, your dignity, and your reputation. Be the person others look up to — whose character is beyond reproach. Be the one who inspires others to achieve excellence. And be the one who lives with honor and dignity. At the end of the day, if you’re not proud of who you are and the way you choose to live your life, little else matters.

Do You Lower Your Standards?

Additional Reading:
Do You Choose Convenience Over Principles?
Moral Character Matters
Honesty: The Plain and Simple Truth
Are You Blurring the Line Between Right and Wrong?
Reputation: You Can’t Run from Your Shadow