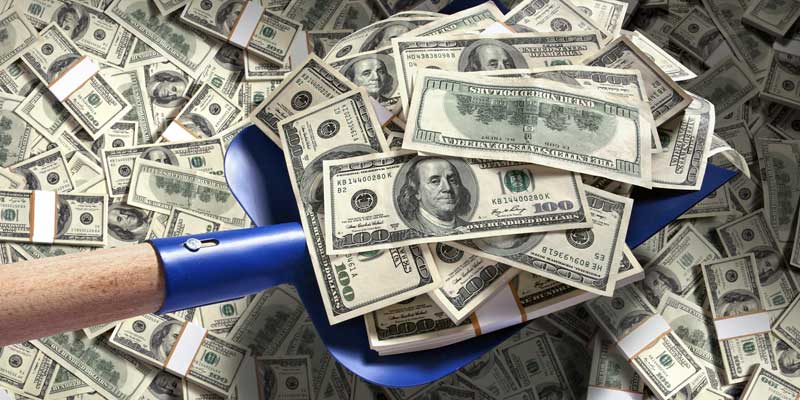 Once upon a time, there was a brat named Phil T. Rich. He grew up with everything a kid could want. He had every gadget imaginable, a house that rivaled the Disney castle, and parents who gave him free rein to do whatever he wanted. Unfortunately, his parents were rarely around for him. And when they weren’t working “killer hours,” they were off to the club to play golf and trade gossip with friends. Phil knew that he wasn’t like the other kids. Whenever he wanted something, he snapped his fingers and it appeared — like magic. He didn’t have to work hard in school because he knew his parents would pull strings to get him into college and ultimately he’d be top dog in their business one day. The only problem was that Phil lived a life of dependency.

If the story ended here, you might be jealous. BUT, then it happened . . . Phil’s parents thought they could double the size of their business by buying a competitor. While the transaction looked great on paper, in reality it had some serious shortcomings. And, before you could blink an eye, their entire business was on life support. Unfortunately, Phil’s family lost everything. Phil thought he had it “made,” but life as he knew it was gone forever.

Poor Phil. He was so ill prepared to face the “real world.” While Phil thought he had the world by the tail, he was never prepared to earn the rewards himself. Unfortunately, this is a sad story without a storybook ending.

The motto of this story is that “Helping people too much only makes them helpless.”

This story is only a fairy tale, but it’s happening in real life every day.

Nonsensical no-bids. Some organizations offer sole-source contracts to a company rather than requiring a fair and competitive bidding process. This makes the supplier complacent and dependent, over time, never having had to win the business.

Guaranteed gratuities. Restaurant servers receive a 10% – 20% tip, regardless of the service they provide. This teaches servers that halfhearted work still gets a reward. So why try harder? Their complacency ultimately hurts the restaurant because a superior customer experience is built on the establishment’s ambiance, food, and service.

Automatic rewards. Annual bonuses are sometimes based on employee tenure or “just showing up” rather than on merit. If high performers receive the same performance reviews and compensation that mediocre employees receive, then we shouldn’t be surprised by complacency and apathy.

Gifts of graduation. Students are promoted to the next grade level regardless of whether they’ve met the minimum requirements. This “easy path” through school is sure to catch up with the students one day.

“Yes” — the most common cop-out. When we say “yes” to kids merely to placate them, or avoid a scene in public, they never learn the difference between right and wrong. Saying “no” to your children, when appropriate, is an act of love.

Unqualified quotas. If opportunity is provided to an individual based on special quotas rather than on his or her true qualifications, will this person use quotas as a crutch throughout life? This will certainly lead to a life of dependency.

Questionable quid pro quos. Special favors doled out through nepotism or a quid pro quo rather than through earning a seat at the table have a real downside. Although these recipients may make it to the front of line, the question remains whether they’re up to the job.

Mediocre meritocracy. Some organizations fail to counsel mediocre performers. Mistakes ultimately become poor habits. Allowing employees to “get by” in this way helps neither the employees nor the organization.

Emotional excuses. Often, appeals are issued that encourage people to buy from a specific source (i.e., “buy American,” buy union shop, buy local), regardless of the value offered. This may kill the incentive to be more competitive, only postponing the day of reckoning when value triumphs (as it commonly does).

Empty entitlements. Providing government services, in some cases for generations, rather than helping people to provide for themselves is a sure path to dependency and helplessness.

Sometimes, well-intentioned plans have unintended consequences. We impose a mandatory gratuity so that the server doesn’t get stiffed; we steer people to buy “Made in USA” because we’re patriotic; we let the mediocre employees “skate” because they’re the breadwinners for their families; we say “yes” to our kids because, you know, we’re their parents and we want them to be happy. Even though our efforts may help the recipients in the short term, we are making them dependent on our good graces, rather than preparing them to accept personal responsibility for their future.

Dependency: People Are Not Helpless Until We Make Them So

When you look for synonyms for the word “dependency” in the dictionary, you’ll find “addiction, habit and enslavement.” When we encourage people to become completely dependent on the goodness of others for their livelihoods or achievements — when we reward people for a lack of effort and personal initiative — we strip them of their confidence, trample on their dignity, and kill their will to improve themselves. Dependency purges people of their dreams, makes their spirit atrophy, and enslaves them to a lifetime of mediocrity.

We are compassionate people. We should make every effort to help the downtrodden get back on their feet, but we shouldn’t absolve them of their personal responsibility to secure a better future for themselves and their families. As Paul Ryan once said, “We don’t want to turn the safety net into a hammock that lulls able-bodied people into complacency and dependence.” Phil T. Rich had the world handed to him, but when the silver platter was removed, he was unable to survive on his own.

Compassion shouldn’t be measured by the size of a handout, but by our ability to provide opportunity to reduce dependency, enabling people to become self-sufficient and helping them to realize their dreams. We must invest in people by instilling strong values, a world-class education, and a powerful work ethic needed to succeed. Success also requires powerful incentives to those who make progress — and “tough love” to those who fail to make the effort. When we offer a handout, we may satisfy someone’s body and soul for an instant, but when we invest in people, our action may benefit them for a lifetime. Bill Clinton said it well, “We cannot build our own future without helping others to build theirs.”

Thoughts? Please provide your comments below.

Additional Reading:
Earning Success the Old-fashioned Way
The Buck Stops with You
The Most Important Lesson in Life