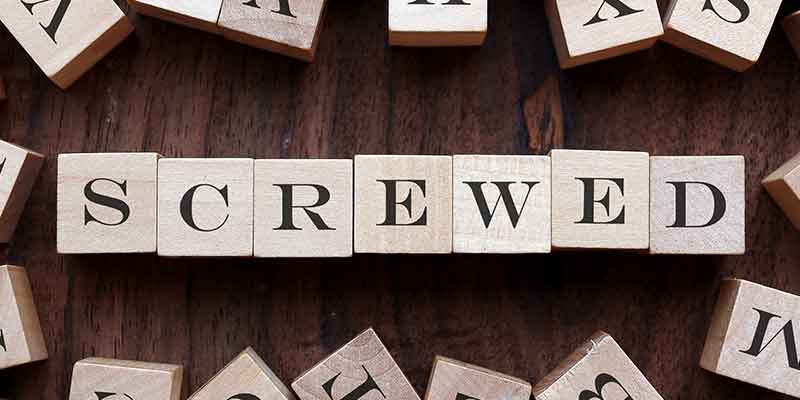 You hit the ground running, worked your butt off, and did everything required of you. And in the end, you exceeded expectations and hit the ball out of the park. It’s only natural that you expect to be recognized and rewarded for your efforts. After all, you deserve it! But what if you’re not? What if that reward is given to someone else — someone with inferior results? How would that make you feel?

The truth is, when rewards are granted based on popularity, bias, or cronyism, rather than on tangible results, it sends a message loud and clear — you got screwed!

People stop trying when there’s no benefit for being exceptional
and no consequence for being mediocre.

It’s no different than a gymnastic championship. Imagine if you practiced tirelessly, competed fiercely, and outperformed your competitor, yet were sent home a loser. (Just because you won the championship the prior two years, the judges decided to give the win to your rival.) Is that fair?

Here are 10 ways you could lose — even though you won:

Favoritism. Favoritism gives unfair preferential treatment to a person or group at the expense of another. It’s not what you know. It’s who you know.

Social status. Social rank is based on someone’s position in society rather than on their character, ability, or achievements.

Popularity. Preferential treatment is given to those who are liked, admired, or supported by the masses.

Cronyism. Friends and associates are granted favors, without regard to qualifications or merit.

Tenure. Special treatment is awarded based on years of employment rather than on performance or achievement.

Coercion. Whoever shouts the loudest forces a hearing — or in this case, a reward.

Fixed quotas. Outcome is based on a predetermined number or percentage rather than on qualifications or merit. It’s hard to demand equality and expect special treatment.

Bias. Prejudice is shown in favor of or against a person or group compared to another.

Pay to play. People buy their way to the table. They receive special favors because they’re willing to pay for them.

Free Can Be Costly

Let’s look at it from the flip side: How can you command the trust, admiration, and respect of others when you receive special treatment? How can you do your job properly when everyone knows that your rewards were unearned? How can you face yourself in the mirror knowing full well that you’re living a lie? Rewards are meaningless if they’re not deserved.

When undeserving people win, the real loser is the so-called winner.

If you receive a handout or have a silver spoon in your mouth, you’re disincentivized from working hard. Why bother paying your dues if rewards are served to you on a silver platter? The truth is, freebies create complacency and a false sense of security. What looks like a gift is merely a Trojan horse. Before you can say “free lunch,” your knowledge goes stale, your skills weaken, and your passion wanes. Essentially, you are robbed of your personal dignity and self-worth. Meanwhile, the message being sent to others is loud and clear as well. Why make the effort if it’s not appreciated? After all, people are getting rewarded based on favoritism, cronyism, and popularity.

Winning without honor is worse than a loss.

Do You Reward Folks Who Deserve It?

If you really want to be helpful and compassionate, don’t tip the balance in someone’s favor. Instead, give them the tools and self-confidence they need to succeed in the real world. Simply put, promote the importance of moral character, give them a first-class education and training, inspire them to achieve great things, hold them to the same high standard as others, and get out of the way. In essence, make them earn their success! It’ll promote self-reliance; it’ll do wonders for their self-image; and it’ll enhance their ability to function in the real world. One of the greatest rewards of success is knowing that the hard-fought victory was earned. They deserve that!

Do You Reward Folks Who Deserve It?

Additional Reading:
May the Best Person Win
Hard Work Is Good For Your Soul
Are You Sabotaging Your Success?
10 Ways That Helping People Makes Them Helpless
Are You Preparing Your Kids for the Real World?