Home » Blog » 25 Things You Should Never Apologize For 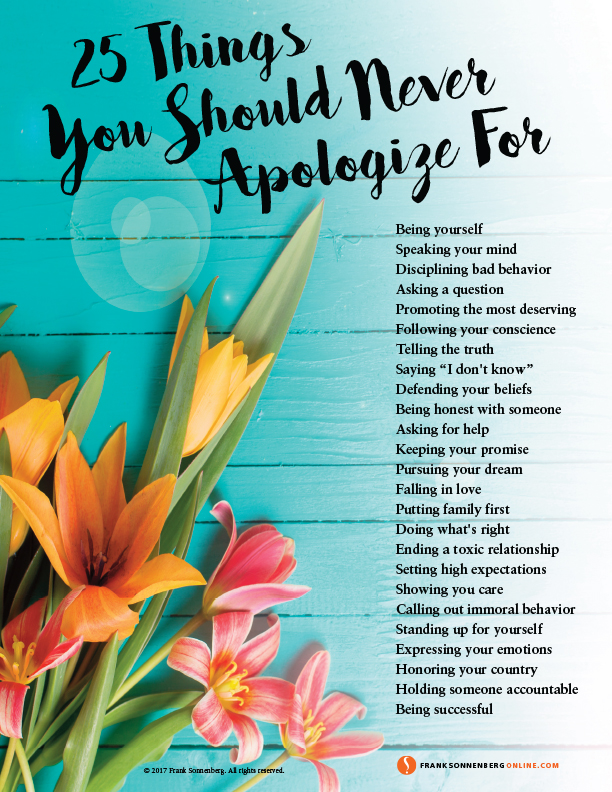 If You Offend Someone, Should You Apologize? (Not Always.)

Additional Reading:
50 Things Your Conscience May Be Trying to Tell You
14 Things You Can’t Afford to Take for Granted
17 Action Steps to Take During Tough Times
42 Ways to Make Your Life Easier

Frank Sonnenberg is an award-winning author and a well-known advocate for moral character, personal values, and personal responsibility. He has written eight books and was recently named one of “America's Top 100 Thought Leaders” and one of “America’s Most Influential Small Business Experts.” Frank has served on several boards and has consulted to some of the largest and most respected companies in the world. Additionally, his blog — FrankSonnenbergOnline — has attracted millions of readers on the Internet. It was named among the “Best 21st Century Leadership Blogs”; among the “Top 100 Socially-Shared Leadership Blogs”; and one of the “Best Inspirational Blogs On the Planet." Frank’s newest book, Listen to Your Conscience: That's Why You Have One, was released November, 2020.© 2021 Frank Sonnenberg. All rights reserved. Unauthorized use and/or duplication of this material without express and written permission from FrankSonnenbergOnline.com is strictly prohibited. For permission, please email Frank@FrankSonnenbergOnline.com.