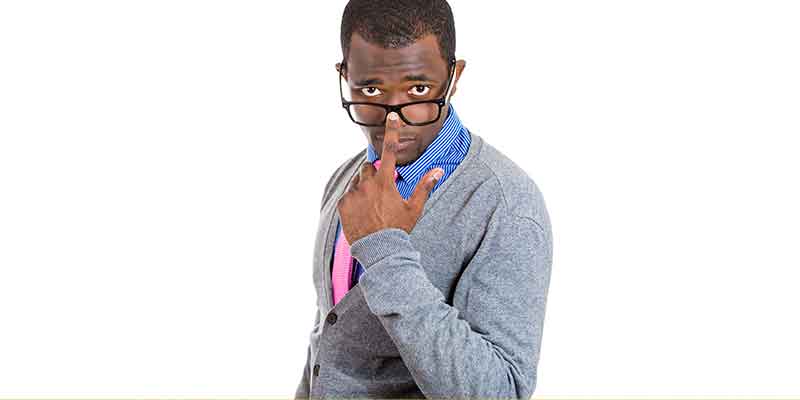 Some folks think they’re always right. They’re first to offer an idea, first to give their opinion, and first to provide their recommendation. For whatever reason, they have an insatiable need to prove they’re smarter, convince you they’re better, and reassure you that they’re never wrong. Right?

Your ego should not equal more than one-half of your accomplishments.

To make matters worse, they have to dominate every conversation, win every argument, and claim credit for every good idea. That said, if you question their thinking, contest their rationale, or challenge their expertise, they’re likely to gaze at you with amazement. After all, who are you to question them? They’re always right, you know!

You have to ask yourself, are they competitive or insecure? Probably both.

There’s Plenty Wrong with the Need to Be Right

Folks who think they’re right all the time tend to dominate conversations, shut down debate, restrict speech, and trample people’s dignity. Apart from the fact that this behavior is unbecoming and unproductive, it hurts the offender in demonstrable ways. Here are 10 reasons why claiming you’re always right is just plain wrong. While thinking you’re always right, you will:

Stifle personal growth. People who think they know it all often fail to invest in their personal development. After all, what more can they learn?

If you think you know everything, you’ll assume there’s nothing more to know.

Create a toxic environment. Folks who think they’re better than everyone are more likely to discount people’s ideas and opinions. After all, if it’s not their idea, it’s probably not worth pursuing.

Lack fresh thinking. People who surround themselves with like-minded people are less likely to generate novel ideas. After all, surrounding yourself with “yes” people is like talking to yourself.

Lack empathy. Folks who are self-absorbed are less likely to walk a mile in someone’s shoes. After all, they think they know what’s best for everyone.

Be unwilling to acknowledge weaknesses. Egotistical people are more likely to repeat mistakes again and again. After all, they’re blind to their flaws because they’re reluctant to accept feedback.

Be deaf to your surroundings. Folks who think they’re incapable of making mistakes are more likely to get complacent. After all, it’s hard to know what’s happening if people only tell you what you want to hear.

Discourage robust debate. People who profess to be right all the time are less likely to view both sides of an issue. After all, when you squelch discussion, silence opposing opinions, or shut off debate, conclusions are drawn from a limited perspective.

You’ll never know if your ideas are sound until they are challenged.

Drive away talent. Folks who think they’re the only ones who can do things right are offensive. After all, people don’t like to be disrespected, judged, or controlled.

Turn people off.  People who impose their way of thinking on others are more likely to generate mere compliance rather than commitment. After all, you can’t expect others to abandon their values any more than you would forsake your own.

Be slow to embrace possibilities. Folks who think they know everything miss exciting new opportunities because they tend to be stubborn, inflexible, and close-minded. After all, the handwriting on the wall is useless unless you read it.

So, if you’re one of those folks who think they’re always right, I’m sure you’re smart, talented, and resourceful. That said, there’s no need to prove it to others. The thing is, trying to be right all the time may be hurting you more than it helps you. When you’re knowledgeable, gifted, and possess a strong sense of morality, you don’t have to shout how good you are from the rooftops. People will judge you and your actions at face value. As Margaret Thatcher said, “Power is like being a lady…if you have to tell people you are, you aren’t.” So show some humility and admit you don’t know everything. This time, you might just be right.

Do You Know Folks Who Think They’re Always Right?

Additional Reading:
Is Your Confidence Turning Into Egotism?
Be Humble: Don’t Let Success Go to Your Head
The Costs of a Big Ego
Take the Shoe-on-the-Other-Foot Test
Complacency: The Enemy of Success
Should Your Viewpoint Matter More than Mine?