Home » Blog » How to Tell If Someone’s Lying to You 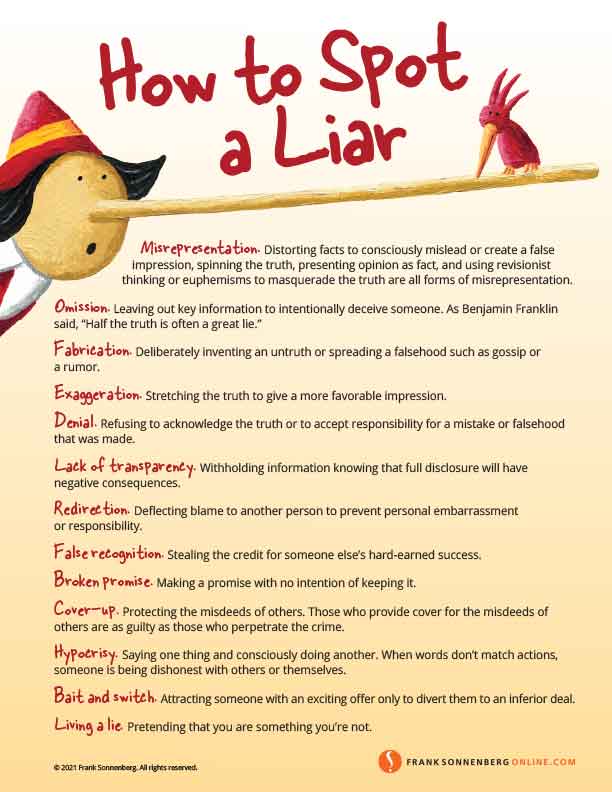 The truth is…we can’t build relationships if we mistrust what friends say; we won’t follow leaders if we mistrust what they do; and we can’t make good decisions if we doubt the accuracy of the information we receive. So why do people lie? The reasons are countless. Regardless of the motive, the ultimate results are the same. As someone once said, “The worst thing about being lied to is knowing you’re not worth the truth.” Can you tell if someone’s lying to you?

Unfortunately, lying is becoming more and more commonplace today. Here are 13 ways to spot a liar:

Misrepresentation. Distorting facts to consciously mislead or create a false impression, spinning the truth, presenting opinion as fact, and using revisionist thinking or euphemisms to masquerade the truth are all forms of misrepresentation.

Omission. Leaving out key information to intentionally deceive someone. As Benjamin Franklin said, “Half the truth is often a great lie.”

Fabrication. Deliberately inventing an untruth or spreading a falsehood such as gossip or a rumor.

Exaggeration. Stretching the truth to give a more favorable impression.

Denial. Refusing to acknowledge the truth or to accept responsibility for a mistake or falsehood that was made.

Lack of transparency. Withholding information knowing that full disclosure will have negative consequences.

Redirection. Deflecting blame to another person to prevent personal embarrassment or responsibility.

False recognition. Stealing the credit for someone else’s hard-earned success.

Broken promise. Making a promise with no intention of keeping it.

Hypocrisy. Saying one thing and consciously doing another. When words don’t match actions, someone is being dishonest with others or themselves.

Bait and switch. Attracting someone with an exciting offer only to divert them to an inferior deal.

Living a lie. Pretending that you are something you’re not.

Any way you cut it, when people distort the truth, they put their credibility at risk while lowering their personal standards of honesty. There’s no excuse for dishonesty. None. As someone once said, “The truth doesn’t cost anything, but a lie could cost you everything.”

Is Someone Lying to You?

Additional Reading:
Honesty: The Plan and Simple Truth
Truth Be Told: 13 Ways to Demonstrate Honesty
How Credible Are You?
50 Ways to Lose Trust and Credibility
A Promise Is a Promise
Live with Honor and Integrity