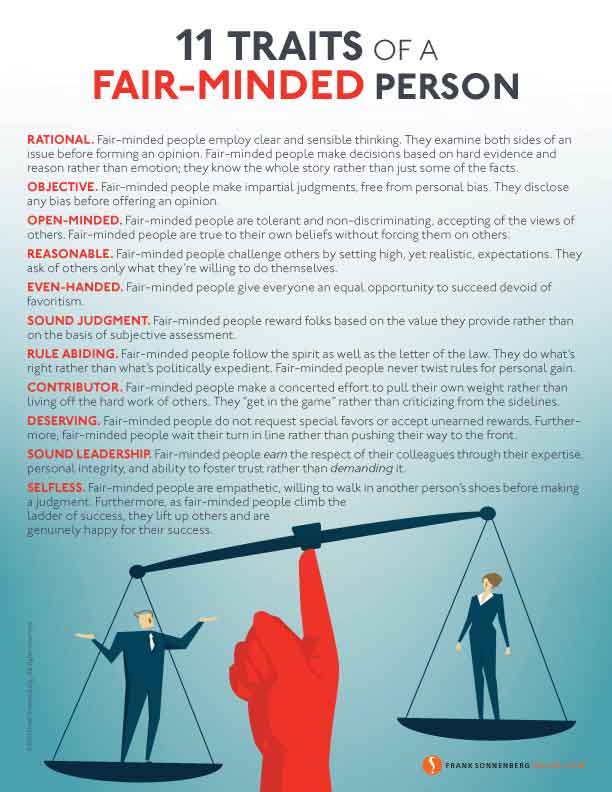 11 Traits of a Fair-Minded Person

Rational. Fair-minded people employ clear and sensible thinking. They examine both sides of an issue before forming an opinion. Furthermore, fair-minded people make decisions based on hard evidence and reason rather than emotion; they know the whole story rather than just some of the facts.

Open-minded. Fair-minded people are tolerant and non-discriminating, accepting of the views of others. Furthermore, they are true to their own beliefs without forcing them on others. As Oscar Wilde said, “Selfishness is not living as one wishes to live, it is asking others to live as one wishes to live.”

Reasonable. Fair-minded people challenge others by setting high, yet realistic, expectations. They ask of others only what they’re willing to do themselves. Furthermore, they pay a fair day’s wage for an honest day’s work.

Even-handed. Fair-minded people give everyone an equal opportunity to succeed devoid of favoritism. They treat bosses and subordinates with the same level of respect. Furthermore, they discourage any real or perceived favoritism that may result from conducting business with friends or acquaintances.

Sound judgment. Fair-minded people reward folks based on the value they provide rather than on the basis of subjective assessment.

Rule abiding. Fair-minded people follow the spirit as well as the letter of the law. They do what’s right rather than what’s politically expedient. They never twist rules for personal gain.

Contributor. Fair-minded people make a concerted effort to pull their own weight rather than living off the hard work of others. They “get in the game” rather than criticizing from the sidelines.

Sound leadership. Fair-minded people earn the respect of their colleagues through their expertise, personal integrity, and ability to foster trust rather than demanding it. When fair-minded people are in positions of power, they “ do right” by people and go out of their way to serve as exemplary role models. Furthermore, they create a win-win environment. They discourage situations in which people outmaneuver one another to gain the upper hand. They avoid zero-sum games in which one-person’s win translates into another person’s loss.

Selfless. Fair-minded people are empathetic, willing to walk in another person’s shoes before making a judgment. Furthermore, as fair-minded people climb the ladder of success, they lift up others and are genuinely happy for their success.