Home » Blog » 25 Ways You May Be Stressing Yourself Out 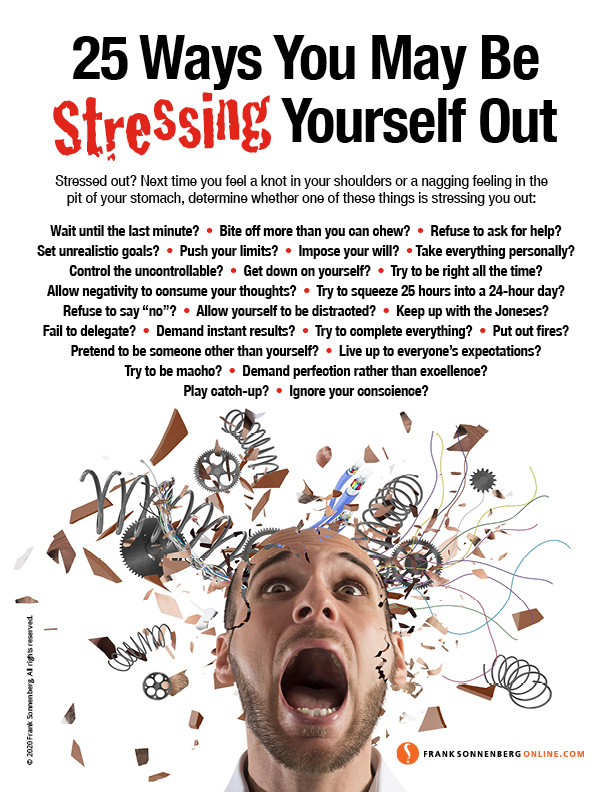 25 Ways You My Be Stressing Yourself Out

Stressed out? Where does it originate? Next time you feel a knot in your shoulders or a nagging feeling in the pit of your stomach, determine whether one of these things is stressing you out:

Are These Things Stressing You Out?

Bite off more than you can chew? Some folks view an overflowing plate as a badge of honor. It’s also a constant source of pressure.

Refuse to ask for help? Some people are too proud to request assistance. They’d rather pull their hair out for hours than ask for help.

Set unrealistic goals? Some folks set unreasonable goals without considering the consequences — they’ll have to honor those commitments.

Push your limits? Some people don’t recognize their threshold for pain. They drive themselves to the brink…and then push themselves a little more.

Impose your will? Some folks try to change people who don’t want to change.

Take everything personally? Some people get defensive when receiving negative comments. They view feedback as a personal attack rather than as constructive advice.

Control the uncontrollable? Some folks accept responsibility for things beyond their control, even though they can’t affect the outcome.

Get down on yourself? Some people demand perfection and beat themselves up if they achieve anything less. Are you stressing yourself out?

Try to be right all the time? Some folks try to win every encounter, regardless of whether it’s important or trivial.

Try to squeeze 25 hours into a 24-hour day? Some folks are always on the run. They’re anxious because they’re always a few minutes behind schedule.

Refuse to say “no”? Some people get sucked into commitments because they’re uncomfortable saying “no.”

Allow yourself to be distracted? Some folks get so hijacked by other people’s priorities that they don’t have time to tackle their own.

Keep up with the Joneses? Some people measure success by comparing themselves to others. It’s a never-ending game. Plus, stressing about money can have a debilitating impact on your health.

Fail to delegate? Some folks are control freaks and can’t let things go. They try to do everything themselves.

Demand instant results? Some people lack patience. They want everything right away.

Try to complete everything? Some folks try to clean their plate before leaving at night. That adds additional stress to a pressure-packed day.

Pretend to be someone other than yourself? Some people create a facade to win acceptance from others.

Put out fires? Some folks take on so much that they do everything half-heartedly. This causes them to run from problem to problem.

Live up to everyone’s expectations? Some people focus so much on making others happy that they end up sacrificing their own happiness.

Try to be macho? Some folks push, push, push. They refuse to take a break or give themselves any relief.

Demand perfection rather than excellence? Some people expect perfection and work hard to attain it. They get anxious if it eludes them.

Play catch-up? Some folks waste time and then pressure themselves to make up for it.

Ignore your conscience? Some people behave inappropriately and are then forced to defend — or rebuild — their reputation.

What’s Stressing You Out?

Additional Reading:
30 Powerful Tips to Reduce Stress in Your Life
42 Ways to Make Your Life Easier
It’s YOUR Life. Are You in Control?
Inner Peace is a Choice
30 Habits that Create Enormous Distress