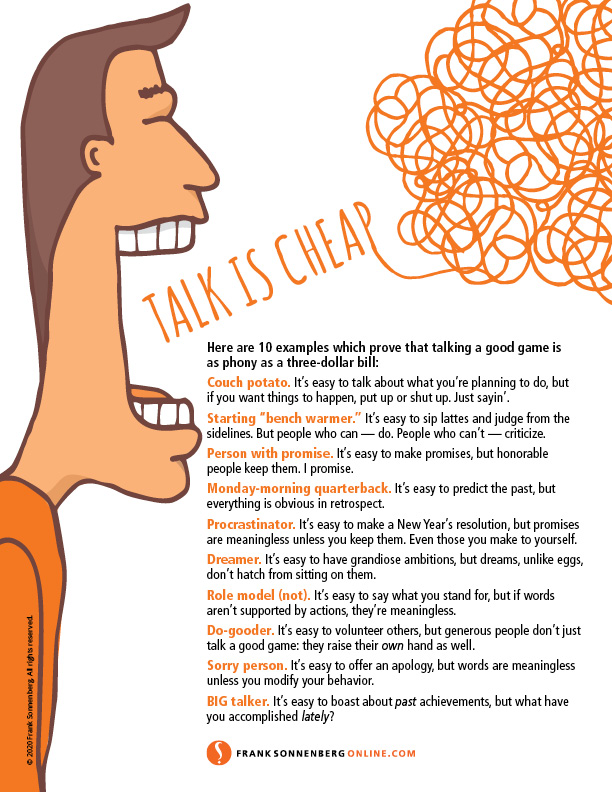 Are You All Foam and No Beer?

Call it whatever you want: “All bark and no bite; All sizzle and no steak; All show and no go.” The meaning’s still the same — talk is cheap. The fact is, being all talk amounts to nothing more than hollow words. Are you, all foam and no beer?

Big talkers are so good at talking a good game that they allow their words to become a substitute for action. They voice their intent, but rarely act. They complain rather than get in the game. They promise everything and deliver nothing. These folks know that their promises require action at some point in the future. And they pray that tomorrow never comes — but it does. And that has trouble written all over it.

When you’re all foam and no beer, you can talk till you’re blue in the face, but people will see right through you. It’ll destroy the trust, credibility, and respect that took you so long to build up. In fact, from that point forward, people will question everything you say. Worse yet, you may even begin to doubt yourself.

Here are 10 examples which prove that talking a good game is as phony as a three-dollar bill:

Couch potato. It’s easy to talk about what you’re planning to do, but if you want things to happen, put up or shut up. Just sayin’.

Starting “bench warmer.” It’s easy to sip lattes and judge from the sidelines. But people who can — do. People who can’t — criticize.

Person with promise. It’s easy to make promises, but honorable people keep them. I promise.

Monday-morning quarterback. It’s easy to predict the past, but everything is obvious in retrospect.

Procrastinator. It’s easy to make a New Year’s resolution, but promises are meaningless unless you keep them. Even those you make to yourself.

Dreamer. It’s easy to have grandiose ambitions, but dreams, unlike eggs, don’t hatch from sitting on them.

Role model (not). It’s easy to say what you stand for, but if words aren’t supported by actions, they’re meaningless. Saying one thing, doing another doesn’t cut it. Do as I do, not as I say.

Do-gooder. It’s easy to volunteer others, but generous people don’t just talk a good game: they raise their own hand as well.

Sorry person. It’s easy to offer an apology, but words are meaningless unless you modify your behavior.

BIG talker. It’s easy to boast about past achievements, but what have you accomplished lately?

If you want to be taken seriously, remember not to confuse talking a good game with living up to your word. When you say something…mean it. Act on your intentions, keep your promises, and honor your commitments. Make your voice stand for something. And make sure that your vows carry the full weight of your integrity. Are you all foam and no beer?

Are You All Foam and No Beer?

Additional Reading:
How to Make Your Words Meaningful
ACTIONS Speak Louder Than Words
Why Do You Trust Some People and Mistrust Others?
50 ways to Lose Trust and Credibility
11 Ways to Earn Respect
Do You Take Your Commitments Seriously?