Home » Blog » Is Morality a Thing of the Past? 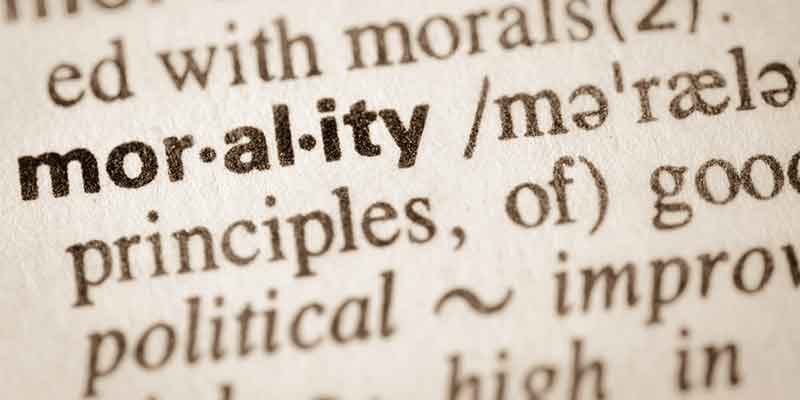 In the good old days, people embraced values such as hard work, playing by the rules, and living with honor and integrity. Do parents still pass those values on to their kids or are they too busy to parent? Do leaders still notice how they’re influencing their followers or are they too self-absorbed to even care? Do successful people still care about how they win or do they only care that they win? In other words, is morality a thing of the past?

Is living a dignified life still on anyone’s radar or is that so “yesterday”? What happens when moral character and living a virtuous life become an afterthought rather than priority number one? I find inattention and disinterest to this matter incredibly troubling. Is morality a thing of the past?

What happens when bending the rules, breaking the law, and cheating to win become commonplace? What happens when demanding rewards, stealing the credit, or basing a promotion on irrelevant criteria becomes standard fare? What happens when people cut in line, exempt themselves from the rules, or game the system without consequences? It’s disheartening. It’s demoralizing. It’s like living in an upside-down world in which immorality is the new morality.

Some people have gotten away with “murder” for so long,
they’re convinced that wrong is the new right.

When someone breaks a rule, deviates from acceptable norms, or commits a crime, people focus intently to see what will happen. Will they get caught or walk away? Will they get reprimanded or receive a pass? Will the punishment be just or unfair? If truth and fairness rule the day, all is well. If not, some people may voice their discontent and demand justice, while others mimic the rotten behavior because “those folks” got away with it. They rationalize their thinking with six lame excuses:

Before you know it, what was once considered unacceptable becomes commonplace.

Even though “good people finish first” used to be a common precept, what appears to be trending now is that dishonest, illegal, and immoral behavior is being ignored, covered up, and even sometimes rewarded. Do you want that to be the new normal — or should we reexamine things?

There will always be liars, cheaters, and thieves. The key is that they must pay a price for dishonest and immoral behavior. Period!

Actions have consequences. So does inaction.

There’s a huge difference between right and wrong. And it’s the job of decent, law-abiding citizens to point out that reality to those who have forgotten.

Here are 15 guideposts to serve as reminders:

Is Immorality the New Morality?

I know people who’ve achieved fame and fortune in spite of their unscrupulous ways. I’m sure you do, too. They think they’ve beaten the system, but I beg to differ. They know how they achieved their “success” and others know as well.

Are they proud of the way they became successful? Can they feel good about how they treated others along the way? I think not. The sad truth is that when these folks stare at the ceiling in the dead of night, they know how they rose to the top. While they had the talent to achieve greatness, the right way, they chose to live a disgraceful life. While they may have all the spoils of success, they’ll never have the feeling of accomplishment that comes with it.

The true reward for living a good life isn’t the fame and fortune that comes with success, but rather, it’s knowing that you earned it the right way. In other words, it’s not only that you won, but how you won.

Do You Think Morality Is a Thing of the Past?

Order Your Copy Today
Listen to Your Conscience: That’s Why You Have One by Frank Sonnenberg

Additional Reading:
9 Powerful Reasons Why Your Moral Character Matters
The Consequences of No Consequences
Would You Do Something Unethical if You Could Get Away with It?
It’s Vital to Say Please and Thank You. Here’s Why…
Are You Blurring the Line Between Right and Wrong?
Do You Choose Convenience Over Principles?
The Glue that Supports a Healthy Social Fabric